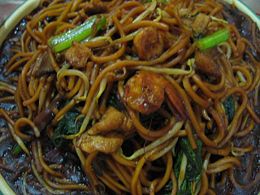 I know Wikipedia is not a scholarly source to go to verify facts. But I nailed it and finally am at peace. Even the Wikipideans think that chow-mein is what I always thought it was. Mingten( to refresh your memory- is the Chinese eatery I went to) I am not wrong, do you get that? Forgive my aspiration to source it but this is what Wikipedia thinks chow-mein is:

Chow mein is a generic Chinese term for a dish of stir-fried noodles of which there are many varieties. The term “chow mein” may refer to crispy noodles, but can also refer to a dish consisting of soft noodles, depending on how long the noodles have been stir-fried, while its counterpart consists primarily of soft noodles.

American Chinese cuisine dish consisting of cabbage,and other vegetables. It is often served as a specific dish at westernized Chinese restaurants with soy sauce and vegetables such as celery, bamboo shoots, and water chestnuts……..Exactly! Now that’s what I am saying, where the heck was noodles there at MINGTEN?